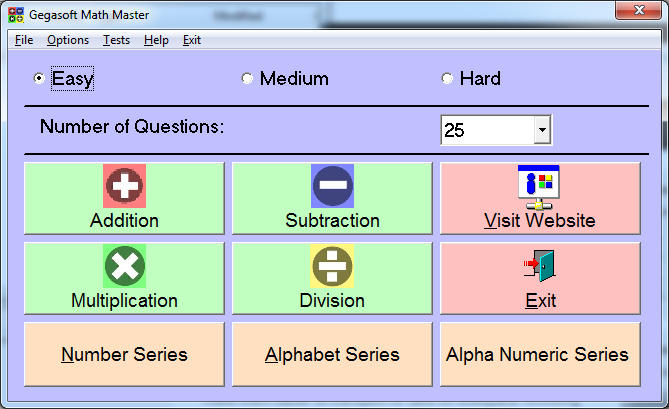 There are three levels to solve your arithmetic or series questions. [Easy Level], [Medium Level] and [Hard Level]. You can choose the level to enhance you practice solving questions.

In mathematics, given an infinite sequence of numbers { an }, a series is informally the result of adding all those terms together: a1 + a2 + a3 + . . .. These can be written more compactly using the summation symbol ?. An example is the famous series from Zeno's dichotomy and its mathematical representation:

The terms of the series are often produced according to a certain rule, such as by a formula, or by an algorithm. As there are an infinite number of terms, this notion is often called an infinite series. Unlike finite summations, infinite series need tools from mathematical analysis, and specifically the notion of limits, to be fully understood and manipulated. In addition to their ubiquity in mathematics, infinite series are also widely used in other quantitative disciplines such as physics, computer science, and finance.

Use this math utility program/software to enhance your IQ Level of solving mathematical arithmetic functions and mathematics sequences/series.